I’m sorry to surprise you with such impossible questions. I felt also assaulted by them 6 years ago when I arrived in Belgium. They came as I was trying to find out what was underneath a culture that was new to me. They gave some clues but they solved nothing.
Off course, I had an idea of what the words Gold, Blond and God referred to. I knew, for instance, that the three are desirable to some extend. Gold is desired for its shininess, and blond hair too in fact. Camiel once told me that blond people were hired in the first days of cinema to portray the main star of the film,

partly because their hair made a sacred halo over their heads: the light plus the film made them stand out over the others. That’s when the stars started to see the gold and fame. Nowadays, If you want to shine you can buy in the supermarket a box of gold blond hair dye. Think of the hair colour of the model in the commercial from the Million perfume Paco Rabanne. Or the hair of the Divino Niño, one of the most popular religious images in Colombia. This kind of shiny hallo made me think also about the stories of ecstatic religious experiences. People that get into this kind of trances often describe them as a very strong light that takes over the space inside and outside their bodies. I guess this is reason why Baroque churches have a lot of gold and why it’s so expensive too.

Even though god, gold and blond are not exactly the same thing they help me to understand better one and the other. Blond is yellow and shinny as gold, but gold’s value exists beyond the mundane. A bit like god, in fact for some people gold is god. But if blond is gold and gold is gold then god is blond? 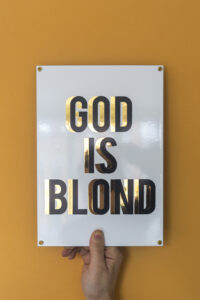 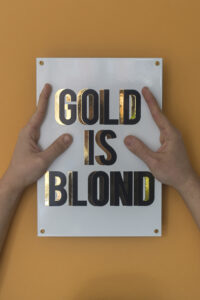 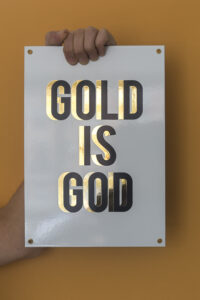 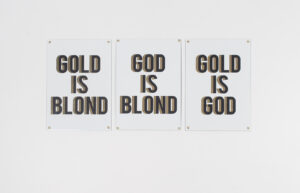