We are happy to participate in Ballroom Project #4 during Antwerp Art Weekend.
At Turnhoutsebaan 92, 2140 Antwerp

Ballroom’ in 2022, following a proposal by Ilse Roosens (curator of Mu.ZEE in Ostend), is devoted to the concept of the grotesque, to which the artists Mieke van Schaijk is showing relate in their own way.

The macabre and fantastic works of Dorota Jurczak (Warsaw 1978) combine influences from folklore and mythology, together with images from her own imagination. The figures in her work are mostly indebted to Eastern European iconography and exist in dark whimsical dream worlds surrounded by anthropomorphic animals, creeping forests, hair and all manner of other things from deformed creatures. Jurczak’s highly stylized works are like fragments of a continuous surrealist story that begins and ends without needing to have any meaning.

Work by Dorota Jurczak has been featured in numerous international exhibitions, including the Seville and Berlin Biennales. Jurczak has also presented her work at the Tate Modern in London; the Van Abbemuseum in Eindhoven, Kunstraum Walcheturm in Zurich, CAPC Musée in Bordeaux and MMA PS1 in New York.

Dutch writer and artist Margriet Kemper says of Jurczak’s installation with four ceramic shoes, “A shoe is always a shoe, even if it’s only one – that’s what it tells us. That’s where philosophy comes in. A shoe has a sole, a heel, a tongue, a toe, a throat. But that is pure poetry. Does the work exhibit the concept of a shoe? Yes and no. The shoes are general and peculiar at the same time. And yes, they are unmistakably shoes, but why made of clay? And why so long? Look how endearing they are, how sensitive, how pedantic, how stubborn, how clever! It shows how delightful this work by Dorota Jurczak is. It says: Look at things, how wonderful and how absurd they are and how much we can learn from them.”

Roy Villevoye (Maastricht 1960) who was educated at the Rijksakademie in Amsterdam has been known since 1992, when he first travelled to the Asmat Papuans, for his work in which the western frame of reference does not lend itself to his visual practice. Initially he made paintings, but through his frequent stays with the Asmat also films (often in collaboration with Jan Dietvorst), photographs and realistic sculptures in which his experiences with the Asmat culture are central. He himself says about his development: “My work has its roots in painting. In the course of time, the formal approach and a fundamental painterly viewpoint have made way for a working method in which art emerges from encounters, experiences and adventures in our Western world and far beyond.”

More generally, his work has themes of colour, cultural codification and identity. About his latest work, the writer and filmmaker Peter Delpeut says: “His images bounce back to the viewer, they create a confusing discomfort that actually stimulates thought. Always the question: Can you be a guest in someone else’s culture? And: What is colour? Of a skin or of a flag, of a ‘colour sample’ or of a human being? It bears witness to his audacity to put this work into the fray just now.

Peter McDonald (JP 1973). He lives and works in London and Tokyo. His paintings examine intricate aspects of human behaviour, gradually compiling an endless encyclopedia of images and scenarios. McDonald’s use of intense colour and universal subject matter describes a realm which balances lucid realism with vivid distortions, filled with references to modern life such as iPhones, queueing, fashion shows and cafés. His pictures investigate pictorial space by playfully exploring perspective and form. This heightened sense of reality is a means through which the artist articulates experience and meaning.

Jelle Spruyt (BE 1979) is a versatile Antwerp-based artist. He works mainly with textiles and various everyday objects, combining textures such as fabric, plastic, wire and threads to create sculptures, masks and assemblages. He appreciates the concept of recycling. The various objects he uses, such as plastic cutlery, a garden hose or floats, are placed in a new environment. 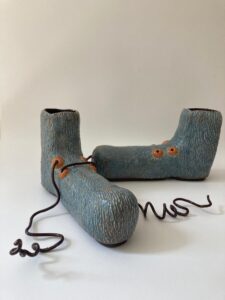 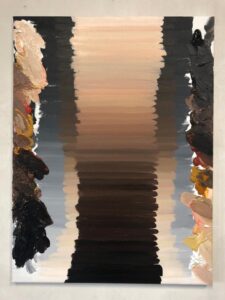 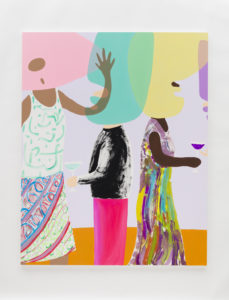 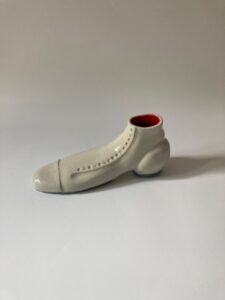 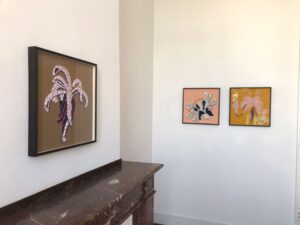 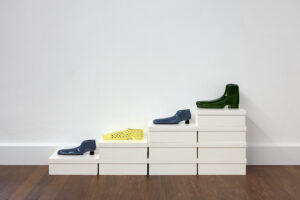 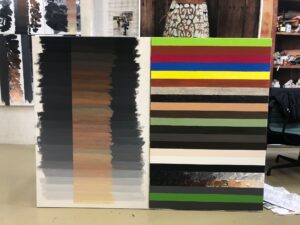 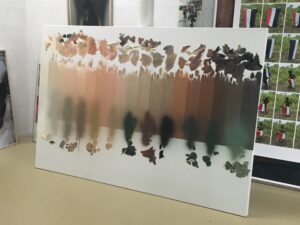 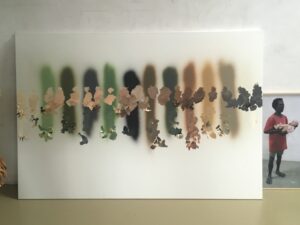 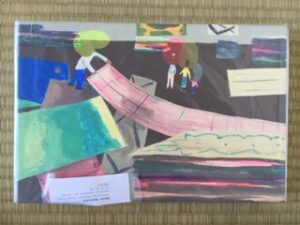 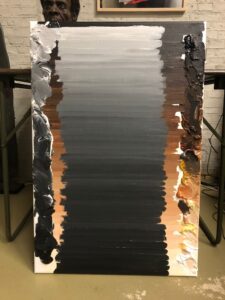 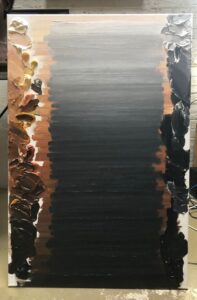 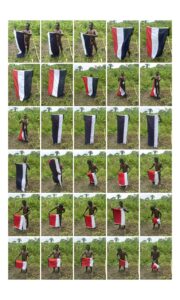 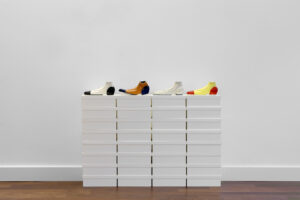 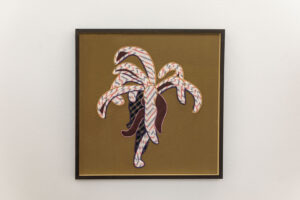 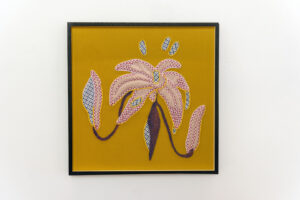