Skip to content
16th - 19th century: the Wunderkammer or Curiosity Cabinet 20th mid century: Joseph Cornell 21th century: Eiji Watanabe The installations of Eiji Watanabe, the Nissan Art Prize winner of 2013, with mushrooms, butterflies and flowers or with fish, frogs and reptiles, reminds me of the Wunderkammer or Curiosity Cabinet which flourished from the 16th till the end of the 19th century. Today we look at the Wunderkammer as an archive as part of a museum with a laboratory character or a thinkspace with utopian possibilities. Joseph Cornell was a lifelong friend of Marcel Duchamp and Yayoi Kusama. In his idiosyncratic boxes he shows our cosmos, birds and plants with a psychological esthetics in which the reality's of our world mix in the subconsciousness of the artist and ourselves. The boxes are filled with a composition of cut out printed images from books and magazines together with small found objects. The installations of Eiji Watanabe show printed color images cut out of books from butterflies, mushrooms and plants or in recent artworks with the cutout color images from fish, frogs and reptiles, perpendicular on the floor, windows and ceiling. He connects the viewer with the experience of an impossible natural world with sometimes rare or extinct species all mixed by the artist. With the irrationality of the subconsciousness he creates a laboratory space with utopian possibilities.Paul Goede 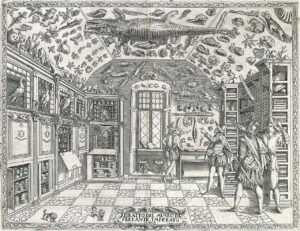 the Wunderkammer of Curiosity Cabinet 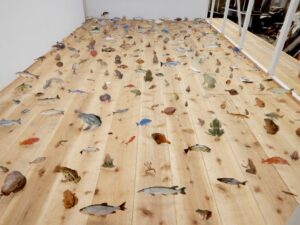